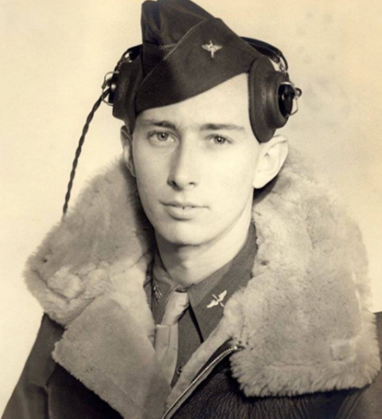 The September Roll Call Luncheon was held on the 23rd at Birchman Baptist Church. Our speaker for the month was B-17 Pilot John ‘Lucky’ Luckadoo, one of the few aircrew members to complete 25 combat missions during WWII.

John Luckadoo was born and raised in Chattanooga, TN. John turned 100 on March 16th this year! Before the United States entered WW2 John and a friend tried to join the Royal Canadian Air Force (RCAF). John’s friend went on to fly for the RCAF, but John’s father would not give permission. After Pearl Harbor, John entered the army aviation cadet program and in May 1942 started training. After nearly washing out, John ended up with the 100th Bomb Group, 8th Air Force in England in early 1943. Flying in what was eventually known as the Bloody 100th due to the horrific losses suffered, John saw extensive combat over Germany as the pilot of a B-17. Very few bomber crews completed the required 25 missions at that stage of the war. Flying over four miles above the ground where the outside temperature was 40 below, John endured the German flak that sent shrapnel into their air-craft, see other bombers explode or go into a death spiral after being shot up by German fighters, and even had his aircraft grazed by the wing of the bomber in front of him as it started going down after colliding with a German fighter. John completed his 25 missions and returned to the states, one of only four out of his class of 40 to do so. It was a period in his life he kept to himself for over five decades after his service. John recently completed a book about his life and at 100 years of age is still telling his story which he did in September at the Roll Call Luncheon.

No comments to show.