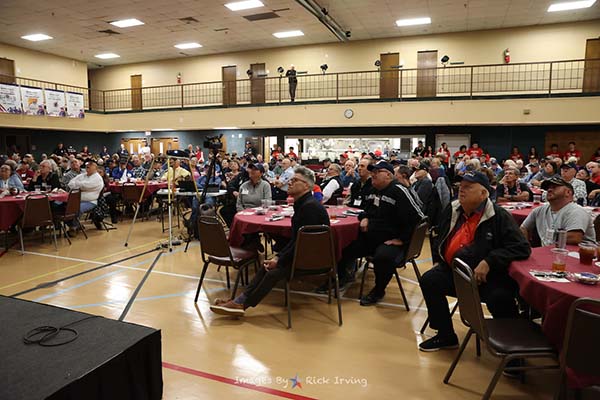 Our November 2022 Roll Call Luncheon took place on the 18th. Our scheduled speaker, WWII Veteran Jack Stowe, was unfortunately unable to attend, but we learned a little more about a few of the Roll Call Board Members.

Mark grew up in Azle, TX and after graduation joined the U.S. Navy through the delayed enlistment program. In June, 1988 he went to boot camp, then nuclear field “A” school, and Naval Nuclear Power School, all in Orlando, FL. He then spent six months in Idaho Falls, ID for prototype training on a running nuclear power plant where he volunteered for submarine service. In March, 1990, Mark reported to the fleet ballistic missile submarine USS Von Steuben and stayed on board until his discharge December 31, 1993. He made five nuclear deterrent patrols out of Kings Bay, GA and was on the decommissioning crew in Charleston, SC.

Sergeant First Class Roy F. Davis is originally from Portland, Maine. After graduating high school in 1979, he joined the United States Navy and completed basic training in Orlando, Florida in 1980. Upon completion of basic training he served aboard the USS Carl Vinson CVN-70 as an Aerographer Mate (Meteorology) commissioning her in 1982 and then made the maiden voyage “Around the World” in 1983 from Norfolk, Virginia to San Francisco, California. In 1984, he left the Carl Vinson and took orders to Naval Air Station Lemoore, California.

After seven years he decided to leave the military in 1987, but two years later he enlisted again taking orders to the United States Territory of Guam. He was assigned to the Naval Oceanography Command Center/Joint Typhoon Warning Center. His command tracked typhoons in an area of responsibility encompassing 11 million square miles. In 1996 after another six years in the military he decided to depart a second time.

In 2005, Davis moved to Fort Worth and enlisted in the United States Army Reserve. After training at Fort Knox, he reported to Co A 980th Engineer Battalion, then to the 721st Engineer Co. After those two assignments, he transferred to the 90th Aviation Support Battalion, then to the 370th Chemical Company, and finally back to the 90th Aviation Support Battalion, where he held Chemical, Fuels and Water MOS.

Mary Staffeld was born in Illinois.  She began her Air Force career as an administrative specialist in November 1978 at Chanute Air Force Base, Illinois. She retrained into Education and Training in 1982 and served as the 3345 Air Base Group On-the-Job Training Manager.  Shortly after her promotion to SSgt, she attended the Non Commissioned Officer Leadership School in residence in 1983, where she graduated as the Top Graduate and earned the Speech Award. After her tour at Chanute Air Force Base she transferred to the Air Force Academy, Colorado where she served as the USAF Academy Hospital On-the-Job Training Manager until she ended her active duty career.  After a lengthy break in service she returned to the Air Force Reserve and began her reserve career at Naval Air Station, Fort Worth, TX, as a traditional reservist in 2005.  In 2006, she joined the Air Reserve Technician program as the Formal School Program Manager, Wing Education and Training technician.  She was selected as the 301st Fighter Wing NCO of the Year for 2008.  Immediately following her promotion to Master Sergeant in 2009 she attended the Senior NCO Academy in Residence and was recognized as a Distinguished Graduate.  Sergeant Staffeld volunteered for a six month deployment to USAFE Headquarter, Ramstein Air Base, Germany, in 2009 where she was an integral part of the Protocol team for General Roger Brady.  She was responsible for visits which included Defense Secretary Robert Gates, Secretary of Agriculture Thomas Vilsak, and Congressman Brad Ellsworth.  Sergeant Staffeld was selected as the 301st Fighter Wing Senior NCO of the Year for 2010.  She moved to a Traditional Reservist position in November 2010 as the Unit Training Manager in the 301st Civil Engineering Squadron where she turned around a failing training program.  Sergeant Staffeld became the First Sergeant in the 301st Logistics Readiness Squadron in June 2014.  Sergeant Staffeld moved to the 301st Security Forces Squadron in April 2016.  She deployed with the 301st Security Forces Squadron to Ahmed Al Jaber Air Base in July 2016 in support of the 407th Security Forces.  The unit consisted of Air Force Active Duty, Air Force Reserve, Marines, Coalition Forces, and Civilian Contractors.  Sergeant Staffeld was promoted to Senior Master Sergeant on 1 October 2016 through the Stripes for Exceptional Performers Program.  Sergeant Staffeld deployed to the CENTCOM Forward Headquarters at Al Udeid AB, Qatar as the First Sergeant/Senior Enlisted Leader from April to October 2018.  Sergeant Staffeld became the First Sergeant in the 301st Aircraft Maintenance Squadron in December 2018.  She then deployed to Romania with the 301st Aircraft Maintenance Squadron in April 2019.

No comments to show.